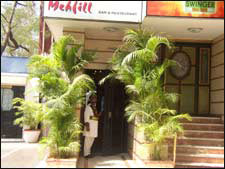 Deepa Menon / fullhyd.com
EDITOR RATING
7.0
Food
Service/Courteousness
Ambience
Value For Money
7.0
7.0
7.0
NA
Suggestions
Good for date/family
NA
Easy parking
NA
Long waiting
NA
Ghazals in the background, super-ornate decor and rich North-Indian food in all its sleep-inducing forms - this is what Mehfill has come to mean for many people. Before the hipper coffee shop Pickles opened next door, this was one of the very few proper restaurants that the Secunderabad area had to offer. And although it's multi-cuisine, Mehfill is best known for its biryani, kebabs and rotis.

Apart from the usual favorites, you'll find a few unusual items on the menu here. If you want a break from chicken corn and the other common varieties of soups, you should try the Indian version, the Shorba. Thick and not too heavily spiced, the Muqqavi Shorba is quite a lovely way to begin your meal here. Non-vegetarians can try the delicately flavored chicken Jahangiri Shorba.

Kebabs come in all varieties and shapes, the most interesting and popular one being skewered on a sword and served. Apart from the Talwar Kebab, you'll also enjoy the Kalmi, Boti and Jhinga Shaandaar, made from tiny, tender prawns. If you can't make up your mind, get the Kebab Milan, which includes nine different varieties. Vegetarians can't go wrong with Makkai (corn), Paneer Tikka and the sesame-flavored Kebab Tiltilla.

You'll find a good selection of rotis here also, like Missi Roti, Kashmiri Naan and stuffed Kulchas. Team these up with Mutton Rogan Josh, a specialty of the house, or the smoke-flavored Dhoon Murgh. Go veggie with the Paneer Begum Bahar, which is cooked in mint sauce, stuffed with peanut chutney and served in a makhani (butter) gravy. The spinach rich Nizami Hundi is another find here, as is good old Dal Makhani. Or skip it all completely and get the Dum Ki Biryani, which is a meal in itself.

Chinese at Mehfill isn't a bad bet either, and the Taipei Crispy Chicken, the Golden Fried Prawns and the Tepan Yaki, a Beijing chicken sizzler, are all recommended. If you're going Continental, try the Penne Pastas In A La Pesto Sauce, the Chicken Japanese Sizzlers, or the Chicken Stroganoff.

Dessert is mostly an Indian affair. You'll find Jaffrani Phirni, Qubani Kulfi and a Bengali Sweet Of The Day, which ranges from Cham-Chams to Malai Sandwich. Or you have a big hunk of chocolate pastry with the Bull's Eye.

Every night 8pm onwards, Mehfill has live ghazals for its diners, who also request songs from time to time. This band of musicians has been accused of getting stuck in a rut, so don't be shy about asking for your favorite numbers.

ADVERTISEMENT
This page was tagged for
restaurants in Abids with live ghazals
hyderabad bars with gazals
live gazal perfomence resturent hydrabad
Basera hotel in hydrabad
restaurants with live ghazals in hyderabad
Follow @fullhyderabad
Follow fullhyd.com on
About Hyderabad
The Hyderabad Community
Improve fullhyd.com
More
Our Other Local Guides
Our other sites
© Copyright 1999-2009 LRR Technologies (Hyderabad), Pvt Ltd. All rights reserved. fullhyd, fullhyderabad, Welcome To The Neighbourhood are trademarks of LRR Technologies (Hyderabad) Pvt Ltd. The textual, graphic, audio and audiovisual material in this site is protected by copyright law. You may not copy, distribute, or use this material except as necessary for your personal, non-commercial use. Any trademarks are the properties of their respective owners. More on Hyderabad, India. Jobs in Hyderabad.